Freya Hodgson continued her impressive run of form at the BE U19 Bronze event held in Wycombe on 31st January, 2015.

Freya earned a silver medal in the Women’s Singles event, losing the final to the number one seed, and former Performance Centre player, Amber Lam.

Freya then teamed up with her regular doubles partner, Anna Richardson, in the Women’s Doubles event.  seeded number one, the pair fought their way through the field to bring home the gold medals.

Xander Tosney brought home a bronze medal from the BE U13 Bronze torurnament held in Worcestershire on 31st January, 2015.

Xander teamed up with his regular doubles partner, Reece Watts, to win a bronze medal in the Boys Doubles event. 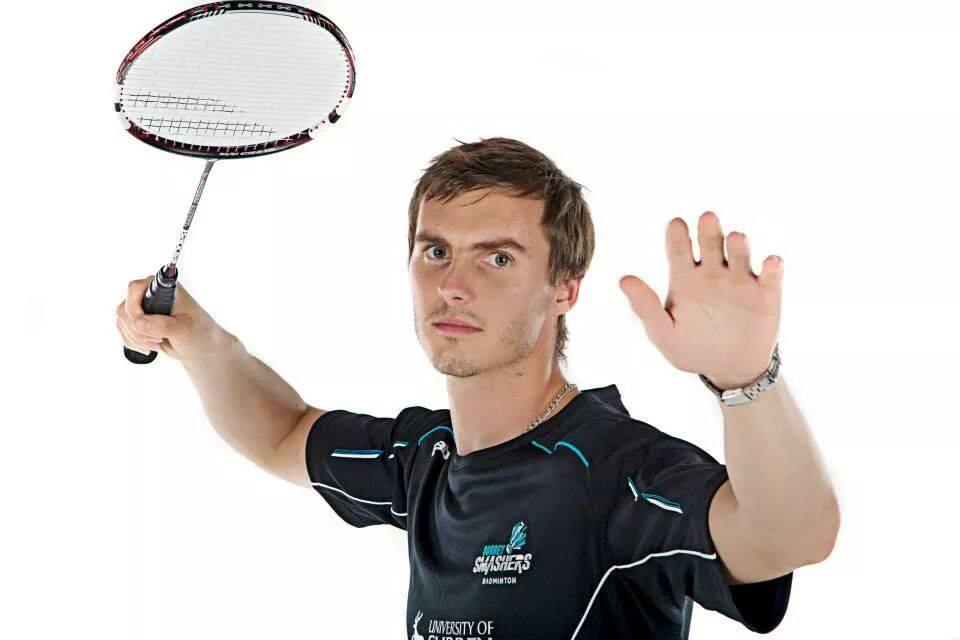 Surrey Smashers pulled off an incredible 5-0 win over Team Derby at Surrey Sports Park on Monday evening to retain their hold on the top spot of the National Badminton League table.

Carl Baxter pulled off the shock of the night as he defeated English number one Rajiv Ouseph in a tie-break to hand Smashers the win in match 3, before Soraya de Visch Eijbergen added another huge victory to her name after beating world number 31 Karin Schnaase.

“I feel so excited. The crowd was amazing.” Baxter said after his against the odds win against Ouseph.

“To do it here is pretty good, with 1000 people chanting your name. I’ve spent my whole career trying to beat Rajiv. Results like this show just how special the National Badminton League is.”

“This is one of the great days of my career!”

History in the making

A 1012-strong Surrey Sports Park crowd witnessed yet another memorable night for Surrey, as they took the first ever 5-0 win in the National Badminton League to ensure they hold on to top spot after match night 4.

Derby looked to be on good form in the opening exchanges of match 1, as Martin Campbell and Gail Emms took the first game of the night against Matt Nottingham and Gabby Adcock in the mixed doubles.

Emily Westwood and Eefje Muskens took to the court in match 2 to face Kate Robertshaw and Lydia Powell and it was the visitors who once again took 1 game lead.

It looked like Derby were set-up to take the match win as Smashers failed to capitalise on a time out, losing game 2 7-9. But a perfectly timed PowerPlay shuttle in game 3 ensured that Surrey pulled back to win 9-6, before turning the match on its head to win 3-2 thanks to a cruising 5-2 tie break victory.

At 2-0 it was the turn of English number one Rajiv Ouseph to take on Smashers’ star Carl Baxter, and it was the Derby man who quickly took a 0-2 lead despite a number of game saving points from Baxter.

Superb awareness and athleticism from the Smashers player handed him a 9-8 win in game 3 before he pulled the match back to 2-2, holding a shot at a match win in the deciding tie-breaker.

With the home crowd firmly behind Baxter, he raced to a 3-1 tie-break lead over Ouseph leaving him just one point away from a historic win, and a match night victory for Smashers, which he completed in style to secure an emphatic comeback and win 3-2.

Match 4 served up just as much excitement for the home crowd as heroine of match night 3 Soraya de Visch Eijbergen came up against world number 31 Karin Schnaase. Two tight opening games were just edged by the young Smashers player, including a carefully timed PowerPlay to win game 2, before Schnaase stepped up her game to win the 3rd.

Unphased, de Visch Eijbergen dominated her opponent to hold her on the back foot in a long rally at 5-5 and went on to take the game 9-6 and pick up Surrey’s 4th win of the night.

This left captain Chris Langridge and Dean George with the task of securing the whitewash for Surrey in the men’s doubles against Andy Ellis and Chris Coles. The former stayed cool under pressure at 8-8 to take the first game 9-8, followed by a quick 9-4 win in game 2.

Another 8-8 game point all in game 3 was taken comfortably by Langridge and George to ensure that they would take the win 3-0, and hand Surrey Smashers a 5-0 match night win over Team Derby.

Smashers Coach Hayley Connor was delighted with yet another win for Surrey: “It feels amazing and I’m in shock. I never thought it would be 5-0 and we seem to be doing nothing wrong as far as the home crowd is concerned. And that is what it’s all about.”

The win sees Surrey Smashers keep their spot at the top of the NBL table after match night 4 and a 100% win record with 12 points. 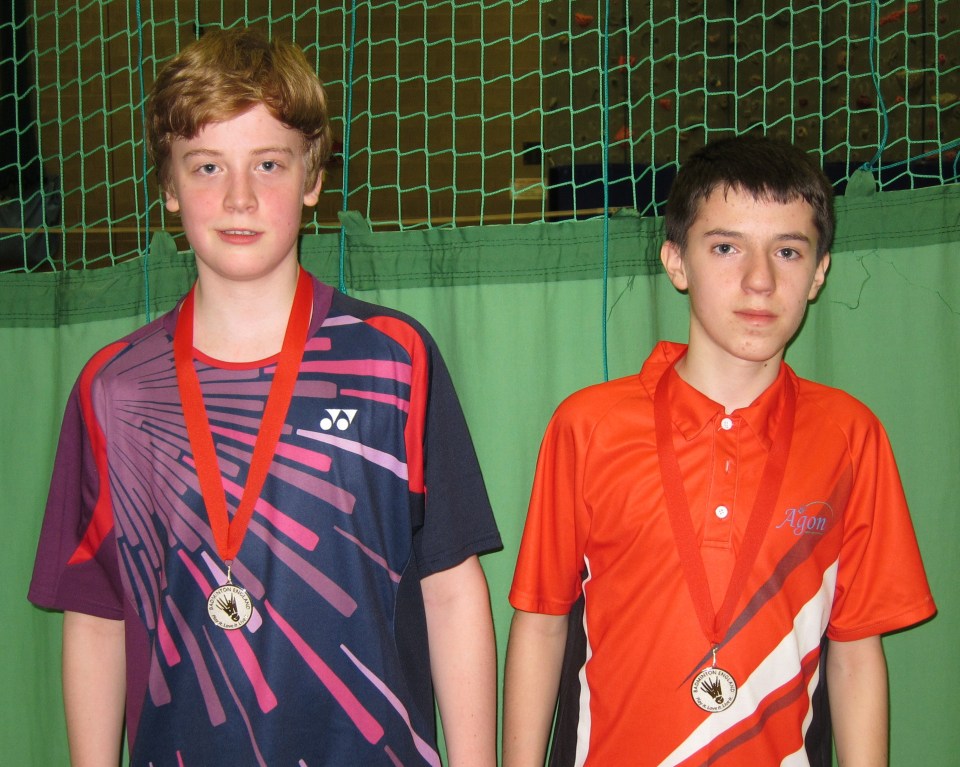 Owen West-Bourne and Harry Morgan continued their impressive run of doubles form at the BE U15 Silver tournament held in Warwick on 25th January, 2015.

The pair brought home the silver medals from the Boys Doubles event.   This was their third consecutive set of silvers on the U15 Silver circuit.

Having won their first medals at their previous tournament, Jake Davidson and Kevin Jude repeated the feat at the BE U17 Bronze tournament held in Essex on 25th January, 2015.

Jake and Kevin teamed up in the Boys Doubles event to win the silver medals.

Jonty Russ and Zach Russ brought home medals from the BE U17 Gold tournament held in York on 24th and 25th January, 2015.

Zach earned an impressive bronze medal in Boys Singles Star event.  This achievement is all the more noteworthy as Zach is two years young for this age group.

Jonty and Zach then teamed up to play in the Boys Doubles event.  Seeded three of four, the pair defied the seedings to battle their way to the final where they met Avinash Gupta and Steven Stallwood.

Having lost the first game of the final, Jonty and Zach then powered ahead in the next two to win the match and take the gold medals.

Head Coach, Dean George, maintained his one hundred per cent record for the season at the BE 48th Cambridgeshire Senior Silver tournament held in Cambridge on the 23rd and 24th January, 2015.

In the Mixed Doubles event Dean teamed up with Catherine Grant.  The pair eased their way through the field without dropping a agme to comfortably win the gold medals.

The Men’s Doubles event foloowed a similar pattern.  Dean played with Chris Tonks and, once again, the pair took the gold medals without dropping a game.

This brings Dean’s impressive gold medal count for the season to six, from six events played.

U19 Gold Derbyshire and Nottinghamshire

Jonty Russ bagged a gold and a bronze medal at the BE U19 Gold tournament held in Nottinghamshire on 17th and 18th January, 2015.

Jonty teamed up with Samodani Wijetunge in the Mixed Doubles event to win the bronze medals.

Jonty then teamed up with regilar parter Max Flynn in the Men’s Doubles event to win the gold medals.

David King travelled to Poland for the Polish Junior International tournament held in Lubin from 14th to 17th January, 2015.

Full details of the tournament can be found on the Badminton World Federation results site.

Freya Hodgson continued her impressive run of results at the BE U19 Bronze tournament held in Bournemouth on 17th January, 2015.

Freya won a silver medal in the Women’s Singles event.

Freya then teamed up with Sophie Males in the Women’s Doubles event.  The pair fought through the field to win the event and bring home the gold medals.